The Barrabool Hills has a history of grape growing stretching back to 1841 when Fredrick Brequet and David Pettavel planted the first vineyard at Pollocksford. Wine production grew over 20 years, disappeared by the 1880s after the emergence of Phylloxera and re-emerged in the 1990s. Barwon Ridge is part of the re-emergence of fine winemaking in the Barrabool Hills.

The first grape growers and winemakers in the Barrabool Hills were Swiss farmers who fled strife in Europe. Wars, revolutions and political unrest from the 1790s through to the 1840s, religious conflict in Switzerland and the failure of crops over several years all led to an exodus from the Neuchatel area of Switzerland. Geelong appears to have been chosen partially because Australia, unlike the alternative destination of America, was a monarchy and Victoria’s Governor LaTrobe had lived in Neuchatel and married a local woman.

The original Swiss growers were complemented by German and even British grape growers, though the Swiss appear to have firm views about their superior skills. 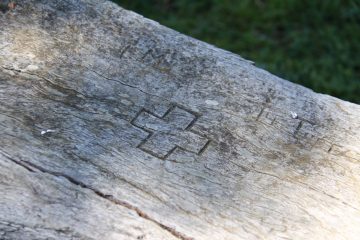 “No Swiss Winegrower has yet planted a vineyard on a flat site in the Geelong District. Mr Caldwell, an English gentleman, planted a small one on a bank of the river Moorabool at Fyans Ford. The vines are healthy, grow luxuriantly, and produce abundantly, but the grapes do not acquire that perfect maturity which is necessary” John Belperraid 1859.

Signs of the early days are still around. A Swiss cross can still be seen carved into a barrel log at the old Barramonga vineyard.

The original immigrants were not permitted to own land so sites were leased, typically for 50 years. In recognition of their contribution to the industry Pettavel and Breuget were eventually granted the status of Denizens of Australia by the Victorian Parliament, which allowed them to buy land in Victoria but not vote.

The early vineyards were scattered throughout the Geelong region, with many in the Barrabool Hills and Waurne Ponds areas. 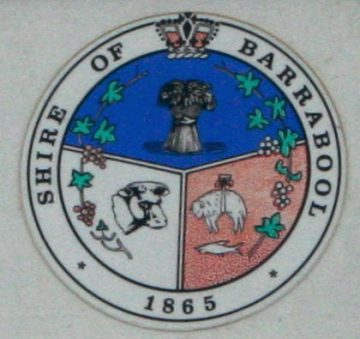 Early vineyards were hand developed, at time without even the assistance of horses. Vineyard rows were trenched 3ft wide and 18 inches deep, manure was added to the bottom of the trench and then they were filled with soil from the next trench. ‘Hot’ manures (eg. horse, sheep, fowls) were recommended for cold (clay) soils, and fat manures (eg. cow, bullock, pigs) were recommended for warm (sandy) soils. Vine cuttings were planted directly into the prepared soil at 1m x 1 m – compared to today’s spacing of nearer 2m x 3m. Vines were trained on a single post and trellising as we see today was rarely used. Many parts of Europe still grow vines in this way.

Vineyards were often supplemented with orchards, particularly cherries (that were sometimes added to the wine to increase colour), and vegetable gardens. Grapes were turned into wine and spirit, or sold as fruit, often in the gold fields. Although the gold fields provided a good market for fruit and wine, it also meant that farm labour was hard to get. This lead to the recruitment of more workers from Switzerland.

Phylloxera is a small yellow aphid-like insect which normally lives on vine roots. The insect causes the vines to develop root galls  and these starve the vine of nutrients. Once in a vineyard the primary form of management is removal of the vines, treatment of the soil and no replanting for many years. Phylloxera is endemic to America and so American vines have developed resistance to the insect. When Phylloxera entered Europe in the 1850s the wine industry was devastated and most of Europe replanted European varieties onto American rootstock in order to gain protection from the mite.

In Australia American rootstock was not used and in 1877 Phylloxera appeared in Geelong. A government inquiry in 1878 recommended that all vines in the Geelong area be pulled up and this was done, with the apparent exception of one Chasselas vine at Suisse Vineyard that is still growing today. By 1880 the industry was finished. There was an attempt to re establish vineyards at Waurne Ponds in the late 1880s but these folded during the 1897 depression.

In 2012 Geelong was tested and declared a Phylloxera Exclusion Zone. This means that it is one of the decreasing number of wine areas in Victoria that does not have Phylloxera and is one of the reasons why vineyard owners are strict about who can enter their vineyards.

It is still possible to see evidence of the early days of winemaking. Original cellars can be found and several sets of ruins are scattered through the hills.

The rebirth of grape growing in the Geelong region was due to the efforts of vinerons such as Daryl and Nini Sefton who established Idyll vineyard in 1966 in the nearby Moorabool Valley, and Tom Maltby and Ian Hickinbotham at Anakie. Even after the modern pioneers gained success and a high reputation for their wines, re-establishment of a viable wine industry in Geelong was a slow process at first, but has accelerated over the last decade. Today the fine wines are produced over an area ranging from Bellarine Peninsula, Surf Coast, Barrabool Hills, Anakie, Lethbridge and Colac areas.

Return of the Pinot Muenier

In 2018, with the help of Geelong winegrowers and Bests Great Western, at Barwon Ridge we replanted a small vineyard with Pinot Meunier. The source vines for this planting have been growing at Bests Great Western since the 1860s when they were originally taken as cuttings from the Barrabool Hills. It is truly a return to the Hills. Learn more.

“It is balsamic, tonic, curative and preservative. In winter it warms the stomach without heating; in summer it cools the body without chilling. In all seasons it elevates without stupefying, giving to youth the wisdom of age, and to age the vivacity of youth.” Ebanizer Ward(circ 1860s) on Barrabool Hills wine.